The Kindle version of Dawn of Chaos has been prepped and is ready to go, along with the updated fourth edition of the prequel, Prologue to Chaos. Both are planned for release next weekend, on or about April 8th, along with several days of free or discounted promotions.

I’m excited to debut the cover (by Charles Imbro) to my upcoming novel, Dawn of Chaos!

This is a near final draft. Aside from some minor touch-ups that Charles is working on now, this is how the final version will look.

I’m devoting February to doing two passes of final editing to get the manuscript ready for publication. If all goes well I should be ready to upload the e-book to the Amazon store in early March.

Until the beginning of next year, Sanctum of the Archmage: Prologue to Chaos can be downloaded for free on the first of every month. The next (and final) “Free on the First” promotion(s) will be:

Amazon also gives me a couple of extra days each quarter to make Prologue to Chaos a free download, in addition to my regular “Free on the First” promotions. The next of these promotions will be on:

If you have an old copy of the prologue, this is a great opportunity to download the new and re-titled third edition. Just go to the “Manage your content and devices” link in Amazon under “Your Account,” and select “Actions… Delete” on your pre-3rd edition copy. (This should have the old title “Dawn of Chaos,” and the book’s old B&W cover with red borders.) Then visit the link below to download the 3rd edition, which features a new title and cover, as well as a full stylistic re-edit. 🙂

I’m happy to announce that the remake of my NWN adventure module, Sanctum of the Archmage 2: The Quest, is now complete and out for beta test. If all goes according to plan I should be able to post it for general release sometime next month.

The update includes version 4.2 of both Sanctum of the Archmage Chapter 1: The Sight, and Chapter 2: The Quest. When released they will both be included on my project page for The Sight, which will be updated to reflect that it now includes both modules.

The updates to Chapter 1 are mostly in the form of gameplay improvements. The changes to Chapter 2, however, constitute a remake that is similar in scope to the version 4 changes to The Sight. They feature new and re-built areas, new and expanded quests, new custom content, and lore changes to bring the story more in line with the novels. They also include a significant revamping of custom content to use the same integrated CEP and Project Q architecture as the first module.

Thanks to everyone for their patience. I hope you enjoy it!

After a couple of weeks of fairly intensive work, I’ve (tentatively) completed work on the remake of Sanctum of the Archmage 2, now titled The Quest. After a play-test this week to make sure there are no major bugs, I’m going to prepare the module for beta-test and subsequent release. Anyone interested in participating in the beta test, please feel free to comment here, or to PM me on my NeverwinterVault account.

I’m also currently editing and working on production of the now completed and first full-length novel in the series, Sanctum of the Archmage: Dawn of Chaos. If all goes according to plan it should be available on Kindle toward the end of the summer, probably in September.

I’m pleased to present the first draft of the cover to my upcoming novel, Dawn of Chaos: 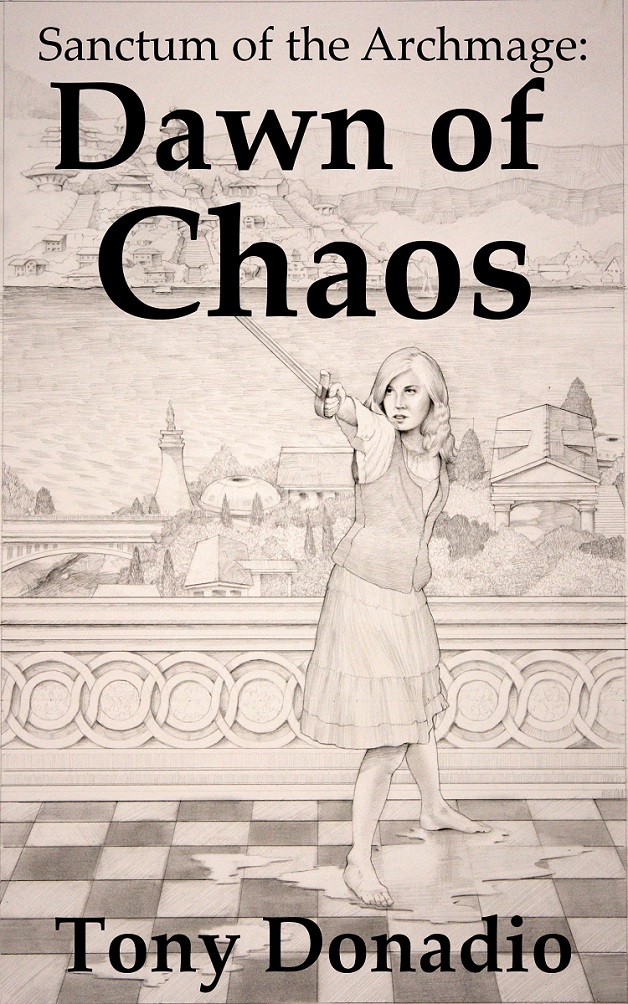 The titling is rough and only notional for now. The final version will be more consistent with the series intro, Prologue to Chaos. My illustrator Charles Imbro is is working on a color version of it for the final cover. I’m also planning to include the black and white illustration in the text in the appropriate scene.

Momentum is picking up on writing the climax to Dawn of Chaos! “The Last Stand” was running long, so I decided to break all but its last and climactic scene out into a separate chapter. The result was Chapter 21: The Terrible Truth, and it’s now complete. Chapter 22: The Last Stand will complete the climax. After that all that remains are the three chapters of the denouement.
The book is working out to be longer than I’d planned, but in a good way. The current word count with four chapters to go is 116,577 words. The final draft will probably end up around 130k.
Also, stay tuned for an announcement! I’m hoping soon to be able to release a first draft of the cover art for the new novel.
Dawn of Chaos

Chapter Fourteen is finally complete. As of now, the manuscript for Dawn of Chaos stands at just over seventy five thousand words.

This was a particularly difficult scene to write, because I wasn’t actually certain I could make the idea that I had for it work. I think the end result turned out to be very successful, although a bit longer than I had expected.

Chapter fifteen starts the buildup to the climax of the novel in chapters seventeen and eighteen. The good news is that I have a very clear idea of what happens in that part of the story, so — time permitting — writing the rest of it should go much faster. Once again my writing is picking up momentum, and I’m very excited about it.

Prologue to Chaos: Introduction to the Sanctum of the Archmage Saga will be available free on Amazon Kindle tomorrow, Sunday, May 17th. This will be the first free promotion for the newly revised and re-titled third edition.

I’m very pleased to announce that Prologue to Chaos, the re-titled third edition of the Introduction to the Sanctum of the Archmage Saga, is now available from the Amazon Kindle store:

I hope you all like the new cover. I think it looks great and I’m very excited about it.

The third edition features a new title as well as a new cover, and a full stylistic re-edit. The title change will let me use Dawn of Chaos for the first full-length novel to be released later this year. I think it works better and is a much better choice for it than The End of the Beginning, which I’m still going to use for the chapter that ends the story’s climax. I’m also very pleased with the re-edit, which I think significantly improves the quality and flow of the prose. I’ve learned a lot about writing over the last year while working on the first novel, and I think that the new edit shows it.

I expect to be able to pick up my writing pace in Dawn of Chaos again, now that the re-release of the prologue and another flare-up of crazy at work seem to be behind me. I’m beginning to get into the part of the story that builds up to the climax, which is especially exciting to write.

I also hope you all like the new look of the site. I thought it was time for a change of theme. I still have some tweaking to do, but I like the way it turned out. I also now have an email list that anyone interested in the saga and its progress can subscribe to, at: