Here’s a quick update on the status of my upcoming book, tentatively titled The End of the Beginning: Book One, Part I of the Sanctum of the Archmage Saga. Although some (fortunately temporary) craziness at work has once again managed to derail my writing focus, I’m nevertheless making good progress toward a planned release sometime early next year.

It’s time again for the Dawn of Chaos : Free on the 1st promotion! This month, however, I’m extending it for an additional two days. From October 1st thru the 3rd, the Prologue to the Sanctum of the Archmage Saga can be purchased from Amazon Kindle for the very reasonable price of $0.00. So get your copy today! 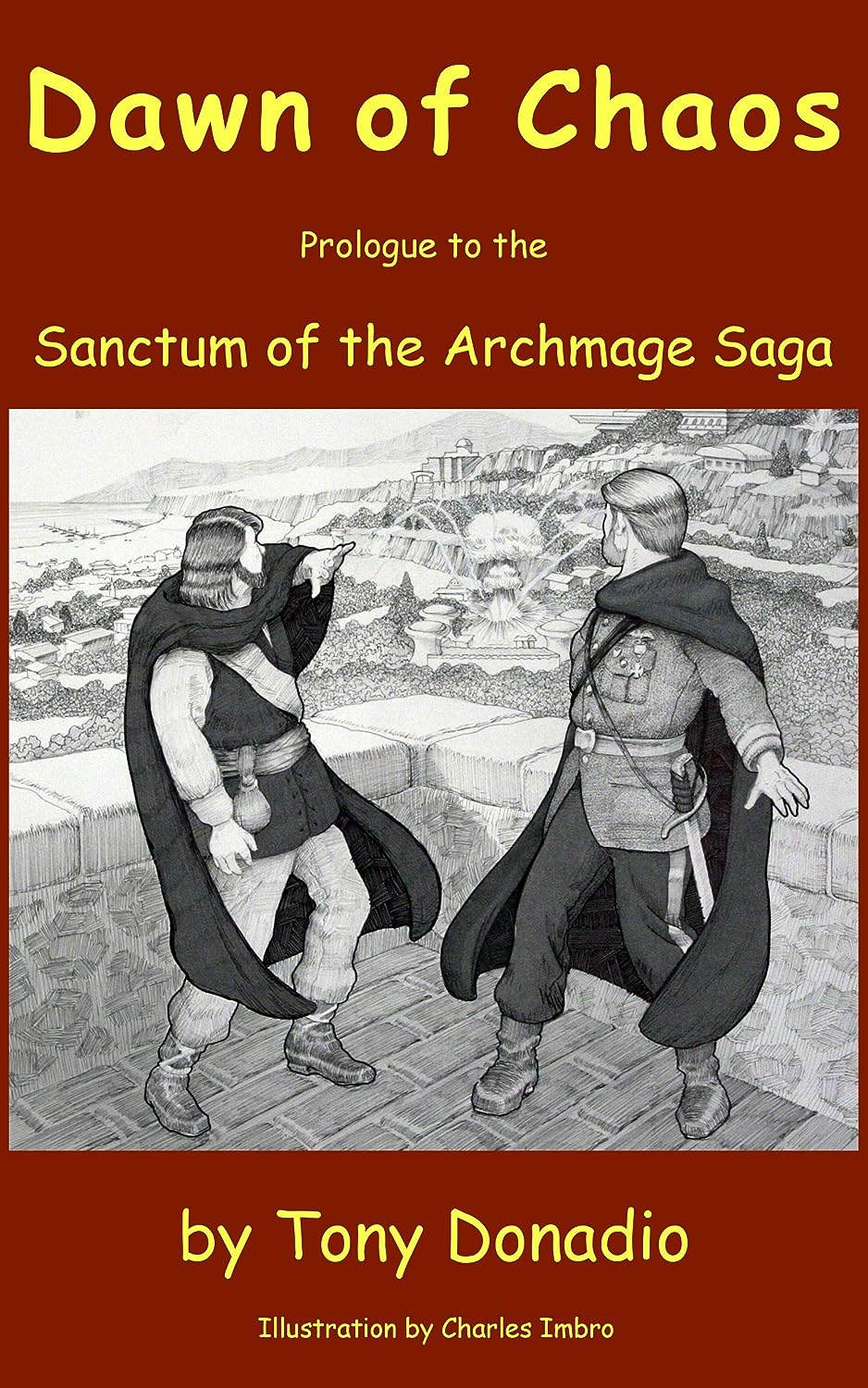 I just finished the first scene of chapter 5 of the first Sanctum of the Archmage novel. Checking the word count, it now stands at over forty (and slightly under forty one) thousand words. By the guidelines of the Science Fiction Writers of America, that officially puts it over the line from a novella and into a novel.

In a follow-up to my last post, I’m still considering what to do about naming the first book. I’m now considering the idea of publishing it under the name I used for the prologue: Dawn of Chaos. I like that idea because in hindsight, it’s unquestionably the best title for the first book as a whole. If I go that route it would mean merging it with the prologue, and publishing it as a (much longer) new version.

I am now officially halfway through writing the first of the Sanctum of the Archmage novels. I finished chapter 4 (out of eight planned) this morning, and have started on chapter 5. The current count stands at a bit over thirty seven thousand words, or a little over 100 “paperback equivalent pages.” One more scene and it should officially cross the line from “novella” to “novel” length.

I’ve solidified the outline and my struggling with the earlier chapters is gone now. The story is flowing out really well, and at an accelerating pace. If I can keep it up (fingers crossed), then the first draft should be complete sometime this fall.

I finally set the time aside to do some maintenance on the site, and to do research on how to protect against spam registration and hacks. Now that I’ve cleaned things up and installed some new defenses, I think it’s safe to re-enable new user account creation, which I had to disable in back in July. So if you want to create an account and comment on the Sanctum Blog, you should now be able to do so again.

If the new defenses seem to hold I may try opening up the comments again to non-registered users as well and see what happens. I would like to make it easier for people to comment on The Sanctum or to ask questions, and it would be great to be able to do that and to still keep out the riff-raff. 🙂

Update: My new defenses have blocked three spam user registrations so far in the few hours since I installed them, so it’s looking good!

The more time I’ve spent writing my novel and refining my style, the more strongly I’ve come to reject the commonly expressed prohibition on starting a sentence with a conjunction like “and” or “but.” Here’s what CliffsNotes.com has to say about it:

The idea that you shouldn’t begin a sentence with a conjunction is one of those “rules” that really isn’t — along with some others you’ve probably heard, like “never split an infinitive” and “don’t end a sentence with a preposition.” Your writing won’t be automatically bad if you break these “rules,” and the greatest writers of English have been breaking them for ages. For example…

The author then proceeds back up his claim with quotes from Moby Dick, Dr. Jekyll and Mr. Hyde, and The Scarlet Letter. To which I can only add, “amen.”

That this is a technique that can be misused or overused, especially among grade-school students just learning to write, should go without saying. I would be very surprised, in fact, if the utility of the rule in helping to impose structure, and to stamp out fragmented writing in young students, weren’t the reason why the prohibition came into vogue in the first place. But for adults who have long mastered these basic elements of structure and style the rule has not only outlived its usefulness, but becomes actually harmful, I think, to the development of a good writing style.

What is the utility of starting a sentence with a conjunction? I think it’s an issue of the crow. The main argument I hear for this rule is that “a sentence is supposed to express a complete thought.” But some thoughts are sufficiently complex, with enough interrelated elements, that trying to express them in a single sentence simply makes them too long — too long for the reader’s mind to parse easily, retaining an ever growing but not yet fully resolved context. Being able to “connect” two sentences with a conjunction like “and” or “but” thus serves at least two important purposes, one of them epistemological and the other stylistic.

Epistemologically, it allows the mind to parse and resolve the thought expressed by the previous sentence, reducing it to a unit and freeing up “mental space” and tension for the expression of a new thought. But starting the next sentence with a conjunction also holds that previous thought in a form that expresses a clearer and more easily grasped connection to the following thought. And it does it in a way that would “choke the crow” of the reader if it were attempted in a single, long sentence with multiple clauses.

Stylistically, I think the case for starting a sentence with a conjunction is even clearer. When used appropriately it is a useful tool to add emphasis, and provide for a more natural flow between related thoughts. I’m sure this is the reason why so many good writers use it, and why I absorbed the technique into my writing style as far back as high school. And the guff I took for it — and the years of self-doubt they caused, until I finally decided to jettison the prohibition altogether — is the main reason for the intensity of my conviction on this matter.

It will still need a few more editing passes, but as of now, Crucible of Heroes  chapter 1 (The City of Rainbows) is complete. It ended up coming to three scenes and just over 12 pages of single-spaced type in 11-point font. So far Crucible of Heroes as a whole is just shy of 9000 words and 470 Kindle “locations.”

By SWFA standards that already puts it over the line into a Novella, with at least six more chapters still to go. So obviously, my initial estimate of 20,000 words is going to be a bit short of the mark. As it looks right now, fifty to sixty thousand is probably more realistic, which will put it well over the word count guidelines for a novella.

So it looks like it’s official. Although a relatively short one, Crucible of Heroes is, in fact, going to be novel.

I’ve had to turn off the user registration feature on the Sanctum Blog until further notice due to a large number of spam accounts being created. Hopefully this is just temporary and I’ll be able to re-enable it again soon. In the meantime, if you want to register an account on the Blog, send email to andarian at andarian dot com and I’ll create one for you.

Here are a couple of screenshots from the recently released remake of Sanctum of the Archmage 1: The Sight, v4q.

I’ve just released an update for Sanctum of the Archmage, Chapter 1: The Sight to version 4.1. The update fixes a handful of (mostly minor) issues that I found in a post-release review of v4.0, and adds a couple of new features.

Download and Install Directions for Sanctum of the Archmage Chapter 1, v4.1q

If you have v4.0 and want to update to v4.1, here’s a (much smaller) download containing only the files that have changed for the new release:

Sanctum of the Archmage v4.1 Upgrade from Version v4.0

Barring any unexpected major bugs in v4.1, I expect this to be the final release of Sanctum 1. Now that it’s out I’m going to take a well earned (and needed!) break from modding before resuming work on the Sanctum 2 v4 update, which I expect to be available this spring. Then it’ll be back to work on Sanctum 3, as well as on an exciting new project that I should be ready to announce very soon. So stay tuned!